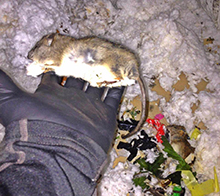 Animal Pros provides dead animal removal services to greater Nashville and Middle Tennessee area wide including Franklin, Brentwood, Hendersonville, Spring Hill, Columbia, and Middle TN area wide. One of the first concerns when a wild animal dies in your home, is the odor. If you are experiencing a dead animal smell or odor, give us a call.

Wild animals are present in your home, they typically like to hide away in small crawl spaces, attics, or walls. If a animal happens to die, it will start to decay and attract other pesky creatures into your homes attic or crawlspace. Actually finding and retrieving the dead animal in greater Nashville can prove difficult, and many home owners prefer to leave it up to a professional. Common dead animal removal calls we receive includes:Dead animal in the attic.

Our trained professionals will find the source of the dead animal, and remove it safely. We provide odor control services to remove the smell that will happen as a result. If the animal has damaged the area, we can also provide restoration services to bring your home back to it’s original condition. Common dead animals we encounter include dead skunks, dead squirrels, dead rodents, dead deer, dead opossums, and dead raccoons.

How do you get rid of the odor of dead animals? Unfortunately, there is no magic spray or device that you can use to make them go away. Perfumes and masking agents won’t help. The use of a moth ball or other repellents often fails during the Nashville dead animal removal process and is not a legal repellent for wildlife.

Dead Animal Removal isn’t always a simple process. It usually includes crawling into tight, cramped spaces in potentially hazardous conditions. The dead animal must be found, removed and properly disposed of. Then the area must be cleaned and decontaminated. It is also critical to perform animal exclusion to ensure the area is properly sealed off to prevent any animals from returning. Our step-by-step solutions will effectively solve dead animal problems permanently. 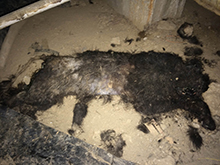 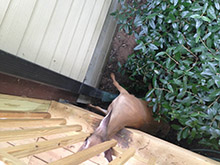 Dead domestic stock removal, which includes horses, cows, goats, and such.
There is no provided service for pick up of domestic animals in the event one passes. However there are several options to help with disposal for small and large animals. For domestic dead dogs and cats, a veterinary clinic or hospital can help. Some do offer animal cremation, incineration, and disposal for a fee. Some landfills will accept a dead dog or cat, but will usually need to be a class 1 landfill and for a fee. Small dogs and cats can be buried, if suitable, depending on location, and local regulations.
For large dogs, you can contact a private wildlife company, transport to a landfill, or a veterinary clinic for disposal. For dead animal removal domestic stock, usually including horses and cows, there is not much information online for this service. Some landfills will not accept a dead animal of this size and if they do will charge a per pound rate in addition to burial fees, so calling a landfill prior is required. Equine boarding facilities usually will have a contact for removal of dead horses and cows, and there is always the option for on site burial.