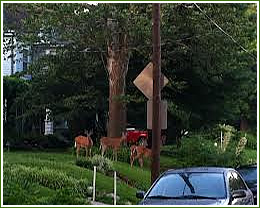 Deer are often found in most cities in every state, as well as in many residential neighborhoods foraging in crops, gardens, on ornamental flowers, even around squirrel and bird feeders. Airports nationwide, also have a high deer numbers.

Deer Problems are often consistent with property damage of crops, increasing road traffic accidents including Airport runways, damage to fencing, deer in gardens, damaging flowers or yard, dead deer, as well as so many deer in the area you have issues with ticks or diseased or sick deer, and deer seeing reflections in windows. Over a million deer-vehicle collisions occur yearly on average cost of $1644.00 per incident. Over 8000 Aircraft collisions with Wildlife annually with Deer collisions estimating over $85,000.00 per incident.

Animal Pros State Certified Wildlife Experts can address Deer problems, as each situation will be unique, from deer fencing, repellents often are ineffective, deer trapping, and even depredation (Permit obtained through the State). Cost – Benefit Analysis is always key to determine if the effectiveness outweighs the damage. Areas with High Deer numbers usually need Fencing as well as depredation to be effective. Temporary Electric fences are inexpensive and may work best in Gardens. Airport Deer problems are usually public safety issues as a effective solutions is required immediately, as contact with Animal Pros Deer Management strategies are available.

Removal of Dead Deer in Louisville

Deer can end up in areas for a number of reasons and die, with little or no sign of what may have caused death. Dead deer may have been hit by a car, injured during travel, impaled on fences, or died from natural causes. Call Animal Pros Deer Experts to solve your deer problem today.